I found this article By Kevin Coll and I could not be happier!!!

In case many were wondering what Patrick Dempsey likes to do besides act, he’s a huge race car driver. Dempsey is actually a real life pro race

car driver as well as a car owner who last drove in Le Mans and placed ninth. In addition to this, he raced in the American Rolex Series and owns Dempsey Racing, which is his team that has a deal with Mazda.

Now Dempsey plans to do a film on racing called The Art of Racing in the Rain. Universal Pictures has picked up the rights to the project and plans to put together the Garth Stein novel as a vehicle for Dempsey.

The film will follow Enzo, a family dog that has a near-human soul as well as a philosopher’s mind. He looks at life through the lessons he learns from his owner, race-car driver Denny Swift (Dempsey).

The project sure seems interesting but I find it more interesting what certain actors like to do besides act and Dempsey just got some cool points with me for being a Le Mans driver. Steve McQueen is the only other guy I know that actually raced in Le Mans and acted.

The official book synopsis is:

“If you’ve ever wondered what your dog is thinking, Stein’s third novel offers an answer. Enzo is a lab terrier mix plucked from a farm outside Seattle to ride shotgun with race car driver Denny Swift as he pursues success on the track and off. Denny meets and marries Eve, has a daughter, Zoë, and risks his savings and his life to make it on the professional racing circuit. Enzo, frustrated by his inability to speak and his lack of opposable thumbs, watches Denny’s old racing videos, coins koanlike aphorisms that apply to both driving and life, and hopes for the day when his life as a dog will be over and he can be reborn a man. When Denny hits an extended rough patch, Enzo remains his most steadfast if silent supporter. Enzo is a reliable companion and a likable enough narrator, though the string of Denny’s bad luck stories strains believability. Much like Denny, however, Stein is able to salvage some dignity from the over-the-top drama.”

Patrick Dempsey, Seattle movie scenes, and an absolutely beautiful book about a dog that has so much soul…. I am in heaven!

One of the best ‘dog books’ I have read in a long time!!  I simply can’t put it down. 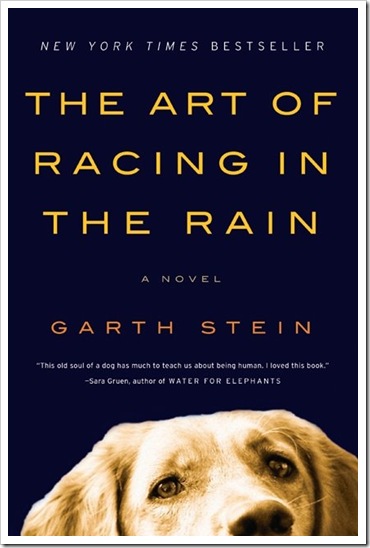 Watch this cute video about Enzo, the narrator of the book.

My name is Elizabeth and I am a hobbyist-photographer-wannabe dedicated to shooting my life through my camera. I am also a Military wife and mother to two adorable dogs who make excellent models.